skip to main | skip to sidebar

Personality made simple and visual. Psychology made simple. Personal growth, inspiration, hope, self help and help in family, relationships, job dynamics, self concepts. Consciousness and personality types. Battle of the sexes. 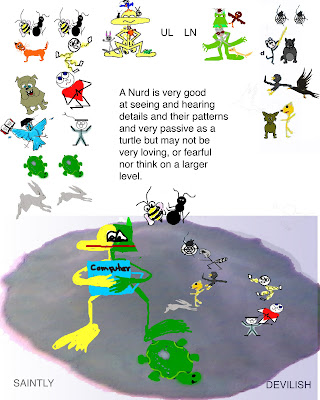 There are four basic biological personality types that reflect the four basic steps of the brain goes though. We perceive things with our senses, then feel fear or love, then we think about what to do, then we do it. Nerds are very strong with the senses. They see lots of detail and dwell on the data more than most. This makes them very good at computers and such.

Feeling-wise, they can be very softhearted. But they tend to not communicate it or act on it. So in reality they seem a bit heartless.

They are thinkers, but usually about details. They see the world from bottom (details) up. They usually are not philosophers or deep psychological thinkers.

On the doing side their energy level is usually low and they seem very passive and patient. They tend to be very loyal but may not show it. People that live with them often feel they are selfish and self centered.

Next we will talk about the second basic personality times, emotional. But first I want to look at the opposite of nerds, Attention Deficits.
Posted by Unknown at 10:56 AM